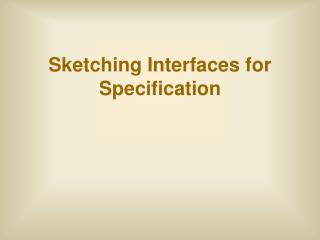 Direct Manipulation Interfaces - . why buy and use a product?. direct manipulation interfaces. positive acceptance of an

Joint HL7 and OMG Healthcare Services Specification Project - . interoperability at the service level via a standardized

Specification - . a broad term that means definition used at different stages of software development for different

CHAPTER 3 SECTION 3.6 CURVE SKETCHING - . graph the following functions on your calculator and make a sketch. what do you

User Interfaces for Information Access - . marti hearst is202, fall 2006. outline. what do people search for? why is