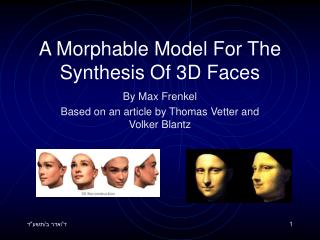 A Morphable Model For The Synthesis Of 3D Faces

A Morphable Model For The Synthesis Of 3D Faces By Max Frenkel Based on an article by Thomas Vetter and Volker Blantz Introduction The following paper attempts to extend the idea of face models to reconstruct face structure from images taken in less constrained environments. Introduction

A Morphable Model For The Synthesis Of 3D Faces

I’m Gonna Sing-Sing-Sing - Due to the nature of different versions of powerpoint you may have used to open this, some

motivation (modern) powerpoint presentation content: 144 sli - The power and ability to succeed is in all of us, all it