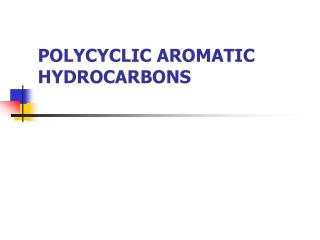 POLYCYCLIC AROMATIC HYDROCARBONS What Are They? PAHs are a group of chemicals that are formed during the incomplete burning of coal, oil and gas, garbage, or other organic substances. PAHs can be formed through natural processes or those related to human activities.

AROMATIC HYDROCARBONS - Benzene, toluene, xylenes (btx), and ethylbenzene are the aromatic hydrocarbons with a

Polycyclic Aromatic Hydrocarbons - . what they are and why we should care. pah – just what are they?. polycyclic –

Causes of Increasing Concentrations of Polycyclic Aromatic Hydrocarbons (PAHs) in U.S. Lakes - . u.s. department of the

Chapter 15 - . benzene and aromaticity. introduction. in early 19 th century, the term aromatic was used to describe some