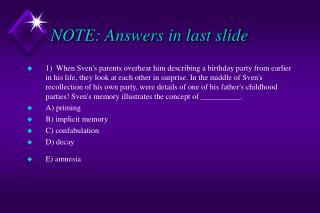 Taking Notes - . research process. what do i take notes on?. as you read, look for answers to your supporting questions.

Note to the Presenter - . print the notes of the power point (file – print – select print notes) to have as you

MAT 155 Chapter 1 - . the following is a brief review of chapter 1. this does not cover all the material in that chapter.

What is a research note card? - . notecards are 3x5 index cards with only one, just one, no more than one fact per card.

Note to presenters - . while there are slides provided for each module of the officiating general principles course, it

Questions Answers - Energy . all of our energy comes from?(note: if you want to check your answers, short versions of