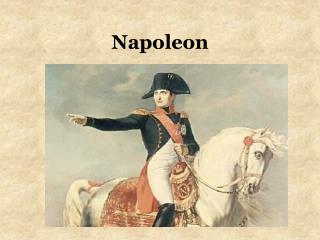 Napoleon - . in this lesson, students will be able to define the following terms: napoleon bonaparte invasion of

Napoleon - Warm-up: define “destiny” in your own words. do you believe that you have a destiny? if so, how will you

Napoleon - . defeat and legacy. after the disaster in russia, (500,000 dead) napoleon is forced to give up power to louis

Napoleon - The young military genius. 1799 napoleon seizes power through a coup. wanted to preserve the good of the

Napoleon - . “the general”. napoleon grasps power. 1796 the directory appoints him to lead the army against austria

Napoleon - . the grand empire and the spread of revolution around europe constitutions, reformed tax system, napoleonic

Napoleon - . born to a poor nobleman, he became a military hero that eventually moved france from a republic to an empire

Napoleon - . “the dirty little corsican”. incredible victories in italy and borders of austria, impressive in egypt