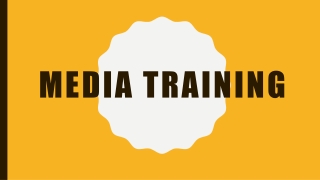 Media Training. Almost every college and professional team provides players and coaches with media training on the do’s and don’ts in a 24/7 media world. Social media sites like twitter and Facebook add new problems—and opportunities—for athletes and coaches. Prosocial behavior in the media - . what do we mean by “prosocial”. not as easy to define as one might think which is

Introduction to Media Training SURFPAC Public Affairs May 2014 - . ground we’ll cover. why talk to the media news and

Giving Communities and the Role of Social Media Marketing 6.24.13 - . overview. when is the right time for social media

Media Planning - . media planning is the process of determining how to use time and space to achieve marketing

HOW SOCIAL MEDIA WILL BENEFIT BASKETPONG - . what is