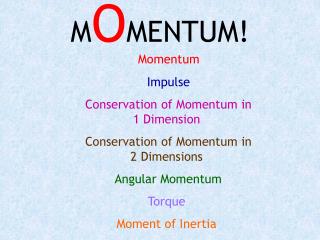 M O mentum ! - . all moving objects have what newton called a “ quantity of motion. ” what is this quantity of

ANGULAR MOMENTUM, MOMENT OF A FORCE AND ANGULAR IMPULSE AND MOMENTUM PRINCIPLES - . today’s objectives : students will

M O MENTUM! - . put on your thinking caps!. imagine a compact car and a large truck traveling with the same velocity. the

Momentum - . the linear momentum of an object of mass m moving with a velocity is defined as the product of the mass and

Momentum - . what is momentum?. in sports when player has a lot of momentum, what we mean, that it will be hard to stop

Momentum - . momentum. i nertia in motion momentum (p) is equal to mass x velocity units for momentum: kg· m/s. which

Momentum - Topic – physics 2a. momentum. what is momentum?. think about a foam ball and a cricket ball hitting a

Momentum - . notes (hrw p196). momentum. definition the measure of how difficult it is to stop a moving object mass in