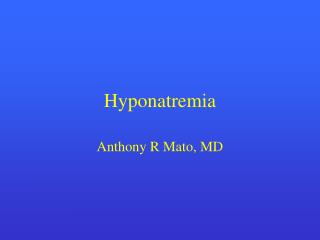 Sodium Disorders: Hyponatremia - The following is material that is not all dr. ciorciari's original thoughts and not

Hyponatremia - . why hyponatremia important ?. common electrolyte abnormality- inpatient and outpatient up to 15 % of

6. What are the basic principles in the treatment of hyponatremia ? - . hyponatremia. goals of therapy to raise the