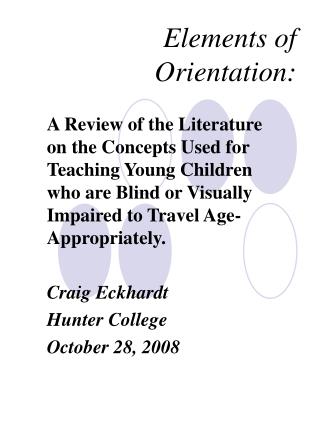 Elements of Orientation:. A Review of the Literature on the Concepts Used for Teaching Young Children who are Blind or Visually Impaired to Travel Age-Appropriately. Craig Eckhardt Hunter College October 28, 2008.

Troop 381 New Parents Orientation - . feb 2008. what is scouting about methods of scouting troop advancement elements of

ADEPT Orientation - . for faculty, supervisors and cooperating teachers. note to participants. this adept seminar is

Employee Socialization and Orientation - . chapter 8. learning objectives. after learning this chapter, you should be

TRiO SSS Orientation 2012-2013 - . where success is the only option!. what to expect from this orientation. at the

Welcome to your Orientation Seminar! TECH CHECK: You should be hearing my voice as I welcome you. - Welcome to the