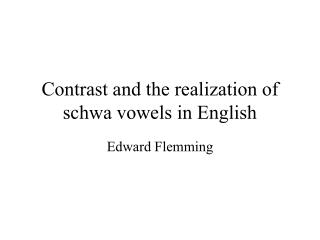 Contrast and the realization of schwa vowels in English. Edward Flemming. Introduction. The project: To derive properties of phonetic and phonological vowel reduction from general constraints related to speech production and perception Outline of the talk: Outline a model of vowel reduction.

The Vowels of English - Sounds in which there is no obstruction of the airflow as they pass through the larynx. the

The English Vowels - . chapter two. the english vowels. a vowel is the sound that connects consonants together to create

ENGLISH VOWELS - . english vowel nº 1/ i : /. the front of the tongue is raised towards the hard palate. it is a front

Classification of English vowels - . vowel sounds are classified according to: the position of the tongue in the mouth,

English Back Vowels - . eng 115 prof. k. horowitz. objectives introduction what are the back vowels? try your luck!

English Central Vowels - . prof. k. horowitz eng 115. objectives introduction what is a central vowel? what is

The Schwa - . hieronymus bosch: the garden of earthly delights. why aren’t words always spelled as they are

Schwa - . an animated and narrated glossary of terms used in linguistics presents. schwa.  this is the symbol called