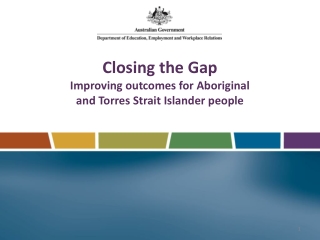 Closing the Gap Improving outcomes for Aboriginal and Torres Strait Islander people. I see closing the gap as a genuinely important national goal… that all Australians will have the same opportunities The Prime Minister of Australia, the Hon Julia Gillard MP, 9 February 2011.