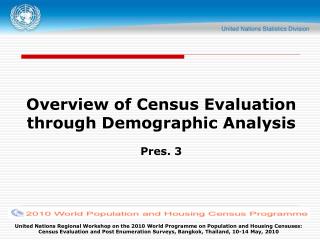 Overview of Census Evaluation through Demographic Analysis Pres. 3. Uses of Demographic Methods of Evaluation. To complement results of matching methods of evaluation to provide further information on likelihood of errors in census data

Chapter 5 - . “colonial society on the eve of the revolution”. population of colonies. by 1775, the population

The Importance of Census and the Practice of Complete Count Committee of Other States - . pearl imada iboshi, chair

Getting to Know your Patch: catchment area analysis - . heather maitland. what is it for?. brings together information

Evaluation of Teaching at Stockton - . heather mcgovern director of the institute for faculty development august 2010.