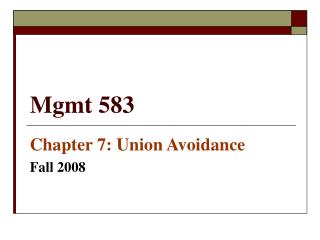 Mgmt 583 . Chapter 7: Union Avoidance Fall 2008. Capitalism v. Unionism. Capitalism is based on the premises that entrepreneurs use their resources to create process to produce goods or services for a profit. Employers are entitled to profits because they took the risk.

Mgmt 583 - . chapter 12: impasses and their resolution fall 2008. impasses. an impasse occurs when the parties are unable

INTEREST BASED BARGAINING TRAINING - . 2014. ice breaker. what are your expectations?. the labor management relationship.

K-12 Unionism and Collective Bargaining: Distinctive Features - . the local school district is the employer; the

SIGNIFICANCE OF NUMBERS IN HOLY QUR ’ AN-PART 2 - . based on the works of harun yahya www.harunyahay.com and others