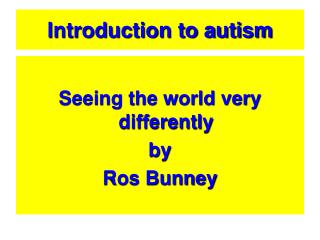 Autism 101: An Introduction to Understanding Autism - . what is autism?. “autism is a disorder that affects the

Students with Autism Spectrum Disorders - . chapter 11. what is the history of autism spectrum disorders?. autism was

Autism Facts - . 1 in 88 children will be identified with autism largest incidents of autism is among hispanics 110% and

Autism - . quick cooking for a five star educator. what to expect during this presentation?. introduction to the skacd #

AUTISM - . by joe coachman bilyn doane samantha gerber. etiology of autism. the term or label autistic was first used by