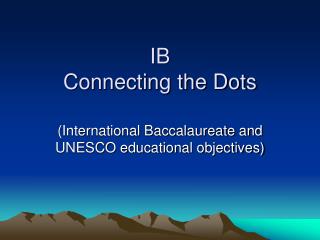 Connecting to the Network - . introduction to networking concepts. part 1 - objectives. explain the concept of networking

AGENDA 21 CONNECTING THE DOTS - . the transformation of america that is taking away our liberties. prepared by richard

Math Bee - . kindergarten classroom bee. what shape is this?. hexagon. how many dots are there altogether?. 5. fill in

Connecting the Lattice Points: What Lattice QCD can tell us about the Quark Gluon Plasma - . what experiment can tell us

WATERSHEDS - . presented by (your name here). connecting weather to the environment. produced by the comet ® program in

Connecting your Executive Board with your Lean Six Sigma Implementation - Presented to: lean, six sigma &amp;