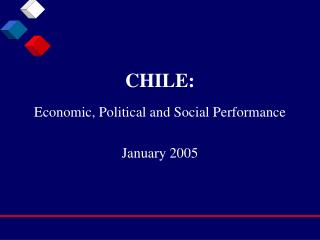 Chile - . faces of chile. population: 16,284,741 situated south of peru and west of bolivia and argentina, chile fills a

CHILE - . coco. introduction. today, chile is one of the most developed south american countries. and many people come to

Chile - . by: ashley b, stephanie b, emily b, and ashley m. government. chile is governed under the 1981 constitution

Chile - . the capital of chile is santiago wheat, corn, beans, grapes, timber, fish and beef are the common agriculture

Chile - . by, sr and lindsay. chiles flag has three colors: red, white, and also blue with a white star. unlike our flag,

Flooding in Chile - Deadly flooding batters the north of