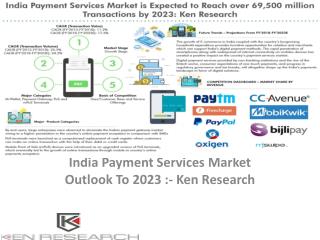 India payment services market which has traditionally been dominated by cash witnessed advancement towards digital transactions both in terms of value and volume during demonetization phase in India. The total number of ATMs (including onsite and offsite) was witnessed to increase from ~ as of 31st March 2013 to ~ as of 31st March 2018, thus displaying a five year CAGR of ~% during the review period.