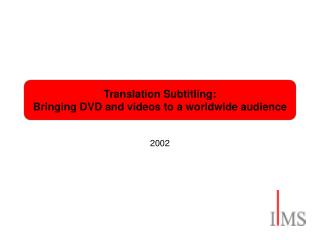 Translation Subtitling: Bringing DVD and videos to a worldwide audience

Translation Subtitling: Bringing DVD and videos to a worldwide audience

Faculty of Languages and Translation - . fall 2014 orientation. one of the leading departments of king khalid university

Bringing the Rain to Kapiti Plain - . a lesson in retelling by mrs. holloway. day one: sneak peek. bringing the rain to

Session 9: Bringing It Together - . skills demonstration. during the demonstration, look for evidence of the design

Speeches to Inform your Audience - . informative speaking. base emphasis on statements of facts. your goal is to make the

The War Winds Down bringing an end to the Great War - . war of attrition. little progress had been made since the

&quot;Will the audience kindly keep their seats.&quot; - . the night of the long knives 30 th june 1934. ernst

Audience-Centeredness - . keeping the audience foremost in mind at every step of speech preparation and presentation. how

BRINGING LIBERALISM TO THE WORLD - . what are the reasons for which some countries attempt to impose liberalism on other