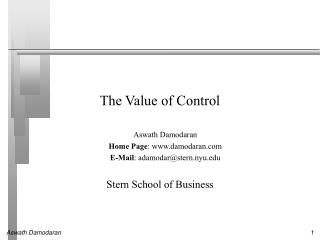 The Value of Control

The Value of Control. Aswath Damodaran Home Page : www.damodaran.com E-Mail : adamodar@stern.nyu.edu. Stern School of Business. Why control matters…. When valuing a firm, the value of control is often a key factor is determining value. For instance,

The Value of Control

CONTROL STATEMENT - . ec201- functions. what is function. block of code that performs a specific

Control, Functions, Classes - . we’ve used built-in types like int and double as well as the standard class string and

Principles of Control - . section objectives. upon completing this section, you should be able to: explore basic food

The Value of Synergy - . aswath damodaran. valuing synergy. the key to the existence of synergy is that the target firm