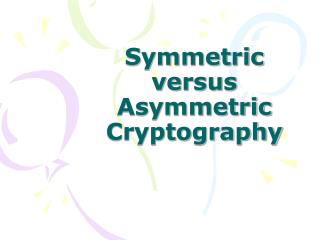 Symmetric versus Asymmetric Cryptography - . why is it worth presenting cryptography?. top concern in security

Applied Cryptography (Symmetric) - . part i. many savages at the present day regard their names as vital parts of

Workshop 3B Symmetric vs. Asymmetric - . workbench-mechanical structural nonlinearities. workshop 3b: symmetric vs.