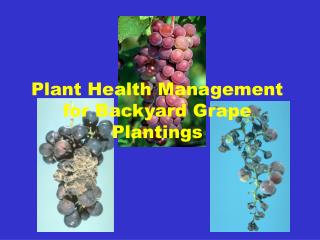 Food, Soil, and Pest Management - . chapter 10. three big ideas. ~ 1billion do not get enough to eat and ~1billion people

Fruit or Vegetable of the Day!!! August 2011 - . - you can plant the top of this fruit and it will grow another fruit in

How do Tart Cherries Grow? - . an instructional powerpoint about one of michigan’s leading crops by: monica clupper.

Unit A: Introduction to Fruit and Nut Production - . lesson 1: recognizing the economic and environmental values of fruit

The backyard Herbal - . little known medicinal plants in our backyards and other wild places. local vs. native plants. Grape Seed Extract Benefits - Grapes are the fruit of vitis vinifera (vine). the whole grape fruit, including the skin,