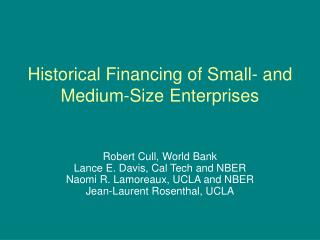 Get unsecured, collateral free small business loans in India - Flexiloans is a technology based financing platform

e-Business for Small and Medium Enterprises - . the short history of the internet. 1969 start arpanet (advanced research

Welcome to the official presentation of world association for small &amp; medium enterprises. - Wasme. welcome to the

Finance for SMEs - . sources of finance for small business “alternative finance”. who needs financing and why where

Benthos - . benthos: definitions. epifauna: live on or are associated with the surface infauna: live within the substrate