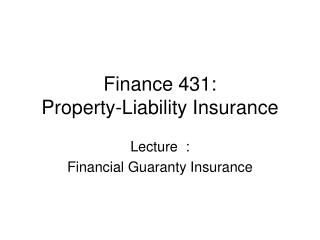 What Is the Property and Liability Insurance Business? - . by emilio venezian. my colleagues all over asia. are awed by

Property and Liability Insurance - . chapter 9. introduction. insurance may be the least understood of all areas of

Finance 431 - . surety bonds. surety. will introduce some new concepts to you surety business contract and commercial

Buy liability insurance - With a vision of becoming delhi’s most admired insurance company, sm services offers you to