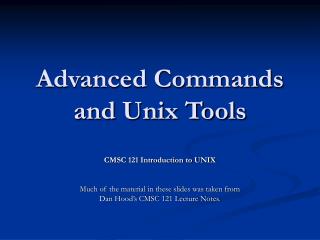 Advanced Commands and Unix Tools. CMSC 121 Introduction to UNIX Much of the material in these slides was taken from Dan Hood’s CMSC 121 Lecture Notes. The History. Almost every shell stores the previous commands that you have issued.

UNIX - . unix is a command line operating system written in the c programming language. a brief review of unix. we have

Some basic Unix commands - . understand the concept of loggin into and out of a unix shell interact with the system in a

Introduction to UNIX UNIX &amp; LINUX Fundamentals - . purpose of this lecture. fundamentals of using unix and Git Training - . ilkka turunen. agenda for today. who i am who are you ? history and basic concepts of git basic git