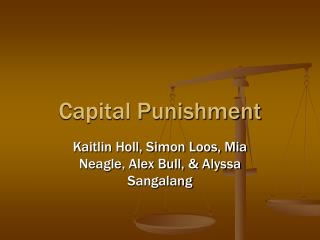 Capital Punishment. Kaitlin Holl, Simon Loos, Mia Neagle, Alex Bull, & Alyssa Sangalang. Ethical Questions. How do we set up a structure that applies punishment appropriately to everyone? How do we determine which crimes are unforgivable?

The Effective Use of Capital - . why worry about bank capital?. capital requirements reduce the risk of failure by acting

Cruel and Unusual Punishment - . “excessive bail shall not be required, nor excessive fines imposed, nor cruel and

raising capital - How to raise capital - for small business owners and