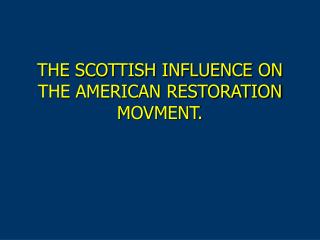 THE SCOTTISH INFLUENCE ON THE AMERICAN RESTORATION MOVMENT.

THE SCOTTISH INFLUENCE ON THE AMERICAN RESTORATION MOVMENT. . The Seed of the Restoration Movement Were First Planted in Scotland in the 18 th Century. DUNDEE. Why Scotland?. A History of Religious Turmoil Joined England in rejecting Catholic church. John Knox introduced Calvinism

THE SCOTTISH INFLUENCE ON THE AMERICAN RESTORATION MOVMENT. RESTORATION and techniques - . prepared by: nur

Interregnum : - . part of speech – noun definition – any period of time between the end of one ruler’s reign and

CLASSICISM (1660-1798) - A “throwback” to classic culture and classic thought (greeks and romans). classicism

John Wilkes, the Wilkites , and the Scottish “Other” - . a satirical engraving of wilkes by hogarth, who shows him

Let’s Learn About Scotland - . xasler.ru. where is scotland?. map of scotland. a few facts about scotland. the capital

O człowieku - About human. o człowieku. poland. armenians around 50,000 armenians settled in poland in the 14th