The chrysanthemum and the sword; patterns of Japanese culture by Ruth Benedict - PowerPoint PPT Presentation 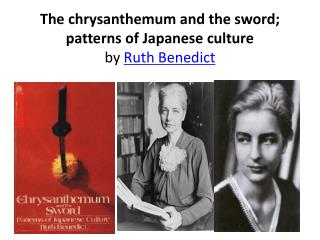 The chrysanthemum and the sword; patterns of Japanese culture by Ruth Benedict

1 / 15
The chrysanthemum and the sword; patterns of Japanese culture by Ruth Benedict
1160 Views
Download Presentation

The chrysanthemum and the sword; patterns of Japanese culture by Ruth Benedict

“The Sword of the Spirit” Ephesians 6:10-20 - “the thief comes only to steal and kill and destroy; i came that they

Essence of Japanese Culture and the Foundation of Business - . j.d. han. contrasts and contradictions. pointed out by

7 patterns of culture in Switzerland - . swiss economics. switzerland is a very economic healthy country. they have a gdp

Which is mightier? The pen or the sword? - . elena syman. which has been the most influential throughout history?.

Ruth’s Top 10 List - . what does work/life balance look like to me?. stage 5 stressed normally. what things are most

The Second Sino- Japanese War - . why are we talking about this?. next case study is the nanjing massacre context: second

JAPANESE CANDLESTICK PATTERNS - . candlestick shadow. the line that appears above and below the body is referred as the

The Internment of Japanese Canadians - . http://archives.cbc.ca/war_conflict/second_world_war/clips/1621/. what does

Benedict Anderson and his - It is ppt file for short presentation, not longer than 20 minutes, but i don't understand,

CRITIQUE OF FUNCTIONALISM - . what is the functionalist view of human nature? what is the relationship between the