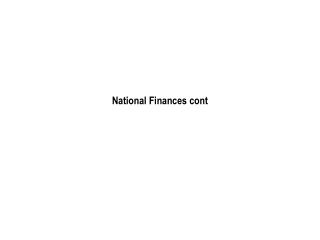 National Finances cont Federal Expenditures $13 trillion in federal deficits projected for the next 10 years The Debt Limit: History and Recent Increases (CRS) Total debt of the federal government can increase in two ways.

Chapter 8 Managing a Retailer’s Finances - . learning objectives. describe the importance of a merchandise budget and

Family Money Management: Getting a Grip on Your Finances - . budgeting is simply a plan to ensure that you know where