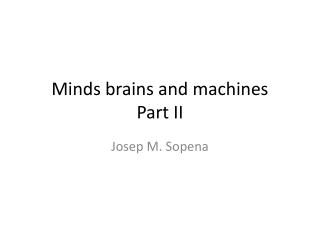 Minds brains and machines Part II. Josep M. Sopena. Course Evaluation. Exam (to be decided). In this part of the course, I will give you some home or class exercises which I can use to evaluate you.

Machines Helping Humans Helping Machines - How do we communicate with trillions of machines? we don’t. it is up to them

Part 2 Distributed Systems 2009 - . again, why are we studying distributed systems?. first, and most importantly: the

Electronic voting machines - . from assigned papers: what did you learn? what struck you as most interesting? most

Nurturing the Hearts and Brains through Treatment and Parenting - . anne lange, bsn, msw, acsw. course objectives. as a

Simple and Compound Machines - . what are simple machines?. a device that allows work to be performed with less effort a