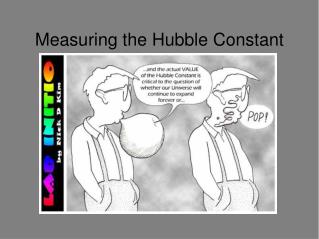 The Equilibrium Constant - . for a general reaction the equilibrium constant expression for everything in solution is

The Hubble Telescope - . by sara williams. how it

The Hubble Space Telescope - . the background. even though the telescope has only been in orbit since 1990, the idea of a

Humble Hubble - . team 18 – evan foote abstract the proposed project is a self-aiming telescope. this telescope will

Humble Hubble - . team 18 tim brown. abstract. the proposed project is a self-aiming telescope. this telescope will

Hubble Telescope - . exploring the far reaches of the universe. by blake shaffer. the launch. named after american

Hubble Expansion - . the milky way has 200 billion stars and a large gravitational force. the magellanic clouds are

UW and the Hubble - . the captain of the space shuttle, atlantis, which took off yesterday to fix the hubble is a uw

Edwin Hubble - . distance vs. velocity (away from us) for a bunch of galaxies. velocity (kilometers per second). distance