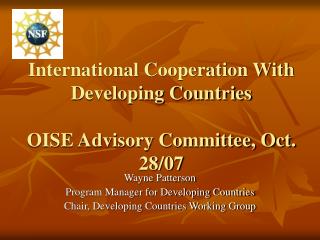 PPI in developing countries in 2006 - . results from the ppi project database november 2007. a product of the world bank

Developing New Products - . linda rochford. what is a new product?. types of “newness” new to the market (new to the

The Roles and Contribution of Sogo-Shosha in Developing Countries - ~cases from mitsubishi corporation ～. december 15,