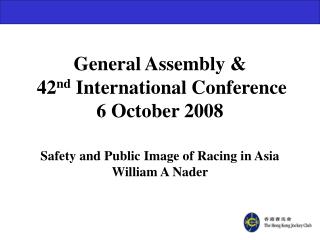 General Assembly & 42 nd International Conference 6 October 2008 Safety and Public Image of Racing in Asia William A Nader. Objectives of Doping Control Minimize the number of violations resulting from the deterrent of a highly effective and well respected medication control program.

Superintendent’s Conference October 24, 2008 - How response to intervention fits into district planning and budgeting.

General assembly - . 2010. conditions. time spent in the conference hall should be minimized everybody should have the

6 th October 2008 - Outline the different patterns of inheritance associated with x linked genes. where possible give a