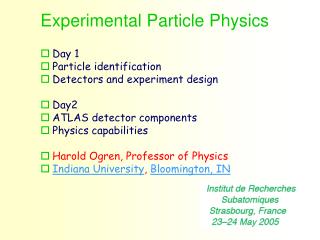 Methods of Experimental Particle Physics - . alexei safonov lecture #4. course web-site. our web-site is up and running

Particle Acceleration for High Energy Physics Experiments - . matthew jones june, 2006. disclaimer. this is not meant to

Experimental Aspects of t physics at CLEO-c - . the tau is the heaviest of the leptons  can provide important input on