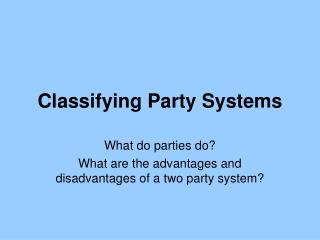 Party systems: - . what difference does the number and kind of parties make?. stereotypes. multiparty systems are

Multi-party systems - . why do we only get two flavors!?. proportional representation. in our legislature (_________) we

Parties and party systems - . relationships to political cleavages. parties may reflect (and sometimes reinforce, or even

Classifying Countries: - . liberal democracies, semi-democracies, and authoritarian systems. what do we expect to find in