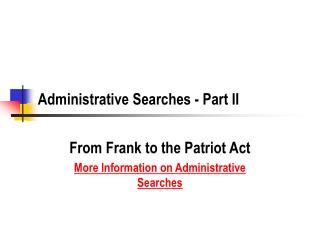 SEARCHES WITH A WARRANT - . warm up: make a list of what you think must be included in a warrant in order to be a valid

Administrative and clerical salaries - . background, best practices, and the future of direct charging

Role of MTS at Administrative offices - . tell me what are all branches in co/ro/do/ptc who are the incharge of these