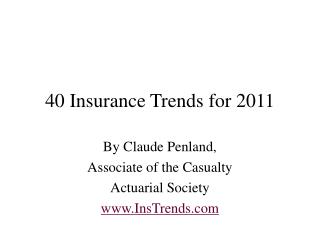 Insurance Trends for 2011 by Claude Penland Insurance Trends for 2011 by Claude Penland

ASSOCIATION OF THE INSURANCE AND REINSURANCE COMPANIES OF TURKEY–TSRŞB - . turkish insurance sector july 2011.

P/C Insurance in an Era of Uncertainty and Turmoil: Overview &amp; Outlook for 2012 and Beyond - . state insurance

Overview &amp; Outlook for the P/C Insurance Industry: Trends &amp; Challenges for 2013 and Beyond - . sita

CONSTRUCTION INSURANCE - . a very warm welcome to all delegates let us work together and pool our knowledge for the

Now What? Health Insurance 101 - . all you need to know now that you’re covered. why is it so important?. insurance

ASSOCIATION OF THE INSURANCE AND REINSURANCE COMPANIES OF TURKEY–TSRŞB - . turkish insurance sector july 2011.

MARINE INSURANCE - . lecture 15 week 8. development. one of the earliest forms of insurance developed out of bottomry and